A Ph.D worth of thanks: setting the stage for a couple brothers

(I wrote this over a year ago, but I needed to finish thanking a formative person who taught me what it took to get to the end of my Ph.D, whether they knew it or not. This is part one of two; part two is here.)

Jim Fridley at the University of Washington once told a group of graduate students at the University of Washington Center for Urban Horticulture, "you never have more time than you have right now; you will never have less things to do as you get older and move through life." He was right, you're always busy, so prioritize the important things. If you don't now, then when will you? So, I've stacked my life full of the things that I want to over the years, with limited regard for the contingencies that life can present.

When I defended my dissertation in December of 2015, I had just completed a whirlwind fall season. I had finished writing my dissertation (quite hurriedly/poorly in hindsight), I fixed up and sold a house, I moved to be with my wife in Flagstaff, my mother-in-law was diagnosed with late stage lung and bone cancer, and I ran or helped out at some (probably too many) trail races. Per normal, I had bitten off numerous professional obligations that got in the way of all of it. A car-ride discussion with Joy Zedler was entirely worth the time obligation on that last one though.

In the vein of Jim Fridley's oddly prophetic comment, I don't regret doing the academic, outdoor, and personal things that I did at the end of my Ph.D. In retrospect, I was pushing the limit of what I could accomplish in a finite timespan. I guess you never know the limit if you don't try to push it.

It mostly worked out, but after ten years of going hard on the work front and elsewhere, it caused the elevated stress/anxiety levels that many early career academics can relate to. My only regret is that I pushed the associated stress along to the people around me. In hindsight, that wasn't worth it.
So...why am I mentioning how stressed out I was nearly two years ago, right before I closed out my Ph.D? Because there's an anecdote here, but it required some stage setting. 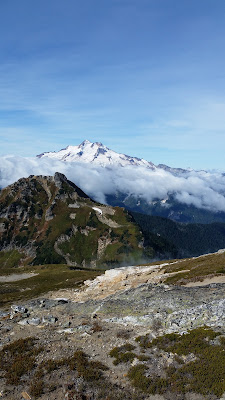 I have always been a high stress, full schedule, high risk, high reward kind of character. I've managed to have some really good times amid some really busy, stressful ones. It goes back to being a youth, when all I did was wrestle, go to school, and do normal teenager stuff. Okay, within a standard deviation of normal stuff, but I digress.

Back then, there were fewer bills and obligations, and fewer serious, grown-up, life things spinning around, so, with supportive parents, I focused on wrestling for several years (and wrote about it relative to academia here), training year round. Because it was a day-in, day-out lifestyle, that required a huge time and personal commitment, every match carried with it an intense energy, an emotional build-up and catharsis, and massive dwelling on the resulting outcomes, even when they were favorable.

In hindsight, rather than just enjoying competing and the challenges that come with it, I sometimes worried, "What if I lose?" "What if I FAIL?" I couldn't enjoy the process because I was too focused on the outcome.

In the fall of 2015, at age 30, I was reduced to a 15-year old version of myself. "Was all this work for nothing?" "What if I can't meet this deadline?" "My career, which has barely started, is over!" "I'm (expletive deleted)!" In hindsight, I probably didn't manage the stress as well as I could have or as I would now.

The same goes for research, running a marathon, restoring a wetland, learning a musical instrument, or a lot of other things. The process begets the outcome. You don't just want something, you commit to the process, and with consistency, and usually some luck, you become capable of achieving the outcomes you want.

So, how did I learn, even though I eventually forgot, and subsequently remembered, that the process is more important than the outcome? It begins with a friend, and a person who is now family...

To be continued tomorrow...

*If this sounds like a jock sports, cliche, it's because I grew up in Ohio, where these are abundant.